WHY THE MCGI/ANG DATING DAAN IS A CULT? By Aloysius Kayiwa 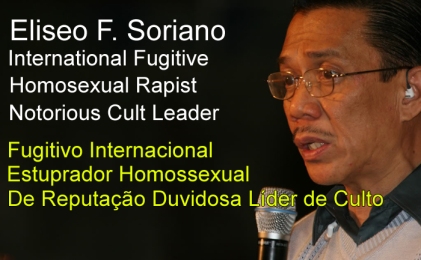 Magicians spend countless hours preparing and practicing for their big show of illusion, and they never expose their secrets. Like magicians, the MCGI cult puts forth considerable effort in the clever and manipulative preparation of their unbiblical teachings to present ingenious statements and masterful arrangements of misleading propositions.

Through the cheap tricks and outright deceit within this bonafide religious cult, it is imperative to break things down into their simplest form and expose why the MCGI or the Ang Dating Daan is a cult;

Having unique guidance from God

Claims of having unique guidance from God is a red flag characteristic utilized by all religious cults. There is absolutely no evidence that God guides Soriano and his cult the Ang Dating Daan with all the falsehoods being spewed by Soriano day by day.

Emphasis on the leaders instead of God is another outstanding cult characteristic. All cult leaders manipulate their followers into believing their faith is in God, when it is actually within the leaders themselves. ADD leaders, especially Soriano, are masterful at this tactic, convincing their members that their loyalty is to God, when in fact their loyalty is to their Presiding and Vice Presiding Ministers. The Dating Daan emphatically claims the importance of the presiding Ministers and that only through them can true followers come to God. Regardless as to how firmly a Dating Daan believes in a certain teaching given by their Soriano, their entire belief system can change through just one Soriano article, viewing it as “proper food at the proper time”.

Being the only ones preaching the good news

Proselytizing and preaching the good news to recruit new members is a common characteristic of religious cults. Elitist and inaccurate claims are made by Soriano and his followers regarding their belief that they are the only Church doing the preaching work that Jesus directed. Technically this is true, but only through MCGI trickery. This supposed good news that MCGI Members refer to is that Soriano is their god and sensible preacher, unlike true Christians who proselytize that Christ their GOD.

Being the only ones teaching truth

“We have the truth” is an outstanding claim made by all members of cults. Cults cleverly equate the term “truth” in reference to their own organization. Through such conceited claims of being the “only true religion”, cult leaders manipulate their followers and their wallets into staying. For ADD members, the MCGI is the only place for truth seekers. ADD followers coin the word “truth” in contrast to other Churches, believing that all other forms of Christianity have been false, and that they are the only ones who have restored it to its truest form. This claim to “truth” is a red flag characteristic utilized by all cult leaders to instill an exclusiveness within their followers.

Cult leaders teach that effective preaching work along with collecting donations is the mark of dedicated and faithful members; those who are proud to stand up for the so-called “truth”. Through such false claims that “unlike Christendom we do not solicit for tithes in the preaching work”, this is the very tricky tactic used by ADD leaders to receive more financial contributions. There is no real difference between a collection plate from the churches of “Christendom” to a contribution demands solicited by the ADD. The only difference is that ADD leaders recognize this humble approach is far more effective in the mass consumption of finances.

That God will shortly save them-(End time’s message)

The apocalyptic doctrine of the “last days” is extremely prevalent with all cults. Cult leaders constantly embed warnings of the impending arrival of the World (End Times) to recruit and retain loyal followers and their financial contributions. Out of fear, members are trapped into believing that their own salvation is based upon their membership with the organization of which they associate. Soriano and the ADD is known for this apocalyptic or End Time doctrine, and has been utilizing it for financial gain for many years. Soriano’s continued predictions that End is soon have proven false. Other cults using this trick include the Watch Tower and the SDA.

Having their own version of the Bible (Ang Dating Biblia)

Religious cults are known for fabricating their own translations of the Bible to support their own doctrines. For example, the Iglesia Ni Manalo cult has their own fabricated Lamsa Translation Bible while the Jehovah’s Witnesses (WTS) cult have their own New World Translation Bible. The Ang Dating Daan is one most prime example of this cult characteristic. Through the “Ang Dating Biblia”, loyal ADD followers are tricked into believing this uneducated fabrication is scholarly and accurate.

Compare Acts 7:25 from the Ang Dating Biblia and the Interlinear Greek-English Bible

And Dating Biblia: “ In his mind, his brothers understood that God saved them through his hand. Nevertheless they did not understand”

The Interlinear Greek-English Bible:  “And he thought his brothers would understand that GOD would give them deliverance by his hand. But they did not understand.”(Acts 7:25).

Do you see the difference?  They are different because a comma was inserted after “In his mind “The whole meaning changes with the insert of the comma. Other version have no comma there.

And although it appears as though MCGI Members are knowledgeable about the Bible, behind the smoke and mirrors lies manipulated followers with highly selective use of Scriptures. Soriano intentionally trains his followers to recite flag mark Scriptures which pertain only to their own doctrines. All religious cult leaders utilize this trick as a preventative measure, in fear of losing loyal followers to real Christianity, a place where no human liaison is required.